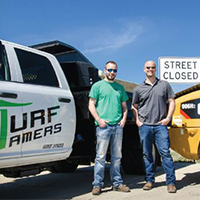 There aren’t many people in the world who have literally turned a job they started in middle school into a thriving business, Turf Tamers, before their 30th birthday. You might compare it to somebody growing a lemonade stand into a full-fledged restaurant. However, to his credit, Fargo businessman Mike Svaleson is one of those unique people who has done just that and turned a part-time job into an enterprise.

In Svaleson’s case, it started in 1999 when Mike was a 12-year-old boy attending middle school in Fargo, North Dakota. Using one push mower, a weed eater and a cart for grass clippings, he began mowing lawns for customers in his immediate neighborhood. Today, Mike’s business, which operates as Turf Tamers, employees up to 30 people on a seasonal basis (six full-time) and offers landscaping, irrigation system installation and maintenance, snow removal, chemical application, dethatching, power raking, spring and fall cleanup, aeration and seeding. Oh, and he also offers commercial and residential mowing.

“I was in high school when I bought my first commercial mower and 20 foot trailer,” Svaleson relates. “I also got my driver’s license at 16, which opened a new set of doors and allowed me to expand throughout Fargo and nearby Moorhead.”

Upon high school graduation, Svaleson enrolled at North Dakota State University where he began studying for a career in law enforcement. He also competed on the track and field team as a pole vaulter. Unfortunately, an injury during his junior year of college put the brakes on track and field.

“I had always dreamed of being a cop,” he admits. “But I also realized that about the only reason I was in college was to compete in track. I had a number of friends in law enforcement, and when I asked for their opinion, they all told me I would be better off being my own boss.”

So after 2 ½ years of college, Mike left college to focus on mowing and landscaping. Ironically, his fear of telling his parents about his plans to quit college was greater than the fear of failure in business. After all, he had already expanded into a full service lawn, landscaping, and snow removal company by 2006. Three years later, in 2009, after deciding to make a career out of the business, he changed the name to Turf Tamers.

The year 2009 was also a turning point in business, even if it did come at the misfortune of hundreds of Fargo residents. That’s when Fargo and Moorhead saw record flood levels as the Red River was inundated with heavy rains and simultaneous snowmelt. Svaleson not only helped the city with cleanup after the flood, but ended up getting a number of contracts to repair and landscape both residential and commercial properties. It turned out to be just the extra boost he needed at the time.

It was also in 2009 that Svaleson bought his first piece of Cat® equipment, partly to help with flood cleanup. It was a used 277B skid steer loader.

“At that time, money was a huge deal and Cat equipment cost more than most other brands,” he admits. “But I had done a lot of research on the best machines for landscaping and I had also studied up on the cost of ownership of different brands and machines. I noticed, too, that used Cat equipment was going for more money on the used market.”

Since that time, Svaleson has gone on to purchase two Cat 287D multi-terrain loaders from Butler Machinery, having traded the 277B within a year for the first one. He also owns a 257D multi-terrain loader and a 906H compact wheel loader, along with a number of work tools that include everything from buckets and forks to power brooms and snow blowers.

“Cat machines are more money up front, but the cost of ownership is less in the long run,” he says. “I’m also 100 percent sold on the service Butler Machinery provides. When you figure how little time we have for lawn and landscape work during the year, uptime is huge. Fortunately, I can call in a parts order to Butler virtually any time of the day or night and get what I need almost immediately.”

Svaleson says he further reduces downtime by dropping off any machine that needs service after the crew has finished with it for the day and then going by the Butler shop to pick it up at 8 A.M. the next morning. It would be hard, he insists, to find anybody else who provides that kind of overnight service.

“If it’s something they can’t fix overnight, they generally have a machine sitting there waiting for me,” he adds. “One time, I even went so far as to have Butler work on a competitive machine that I owned that was still under warranty. I actually paid to have Butler fix it just so I could get it back on the job.” 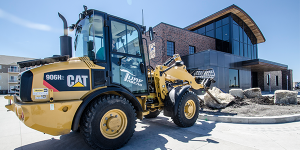 Svaleson says the purchase of the 906H was a situation in which he talked long and hard with the salesman, especially since the compact wheel loader was a lot more money than another multi-terrain loader. As it turned out, though, Mike couldn’t be happier with the purchase.

“The cost of ownership has actually turned out to be lower than that of an MTL,” he says. “For one thing, we can drive it on the road from one job to another versus using a truck and trailer to move the MTL. The 906H also pushes snow like crazy. It’s always the first machine out of the shop in the winter and the last one in. I told the guys at Butler, I wish I could trade the MTLs for wheel loaders during the winter and then trade them back in the spring.”

Svaleson is no less sold on his Cat multi-terrain loaders, though. He particularly likes the suspension and the fact that he can control everything with his hands, which helps reduce fatigue during a long day.

“I also like the undercarriage and the way it allows you to turn on dirt without digging a hole,” he adds.

You can bet that the MTL machines and 906H won’t be the last Cat machines in Svaleson’s inventory. It was just five years ago when the young entrepreneur purchased H20 Sprinkler Systems, which grew his lawn care service abilities exponentially. It was also in 2011 that his sister, Lisa Svaleson Herman, joined him in the business as the office manager.

With the purchase of the additional Cat equipment, Turf Tamers also expanded into dirt work, grading and landscape design in recent years. Considering Svaleson’s love for what he does and the potential for expansion, you might just say, “The sky is the limit.”