When the thermometer reads zero degrees Fahrenheit in the middle of November, you know that winter is just getting started and conditions will only get worse. That’s 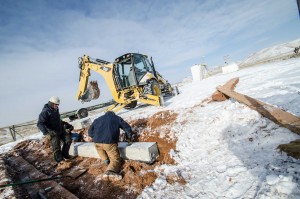 just one of the reasons Steier Oil Field Service, based in Dickinson, North Dakota, relies heavily on Cat® equipment to perform many of the services they offer.

The company was started by Frank and Clara Steier in 1971 as a pumping service with minimal maintenance. In 1979, the couple’s son, Ken, who had already worked in the business since he was a boy, started a roustabout division under Steier Oil Field Service. A year later, in 1980, the family expanded their services to include pipelining and well watching. Finally, in 2012, the company opened an environmental company named Aspen Environmental Services.

Today, the company that still carries the Steiers’ name is a division of Transfield Services, a global provider of operations, maintenance and construction services to the resources, energy, industrial, infrastructure, property and defense sectors. Consequently, Steier Oil Field Services is still the same strong local company with the global support of Transfield. Yet, their values have not changed. Steier is still a company known for getting things done and getting them done right.

To that end, the company says it’s good to know that Caterpillar and Butler Machinery share many of the same values. That’s one of the reasons they are in the process of moving exclusively to Cat equipment. In the past, there was a blend of vehicles and equipment at Steier. Most recently, they purchased several new Caterpillar® machines because they need equipment t 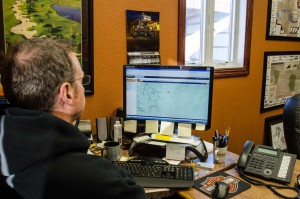 hat will start at 40 below zero and stand up to tough conditions. They know that Caterpillar makes a reliable product with the support of Butler Machinery.

Steier has been particularly pleased with the VisionLink service offered by Butler and Caterpillar. Using the Cat Product Link hardware and VisionLink reporting capabilities, they have remote access to information that tells them where the equipment is and what it is doing. The support aspect of VisionLink also lets them manage the business, while Butler Machinery handles the planned maintenance services. In effect, Butler technicians utilize the equipment service meter hours from VisionLink to track, schedule and perform service at planned intervals. The company does a lot of trenching and road maintenance, so they have Cat backhoe loaders, skid steer loaders and graders all over the Bakken. With a large fleet of machines like Steier’s, it’s important to know where the equipment is located. With VisionLink, they not only get better utilization of the equipment, but it has actually allowed them to get by with less equipment.

At the same time, the support aspect of VisionLink has given them greater peace of mind about the equipment maintenance. One of their biggest challenges is finding qualified employees at every level of the company, including mechanics and service technicians. If they can take that piece of their business and move it to Butler Machinery, where they know that experienced people are watching over the equipment and performing both scheduled and preventive maintenance, it’s one less thing they have to worry about.

Transfield is a growing company. That’s why they’ve partnered with Steier Oil Field Service and Butler Machinery. As a company, they’re still looking at other opportunities in the Bakken oil fields. So this is just the beginning, and they’ll be taking Cat and Butler Machinery with them.