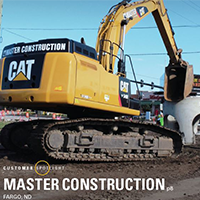 When Master Construction is faced with a $10.6 million project that has to be completed in six months, it pays to have confidence in your crew and your equipment. It doesn’t hurt, either, to get a little help from Cat® AccuGrade GPS technology to save time measuring and checking grades.

Although Master Construction has been involved in a wide variety of projects in the 43 years the company has been in business, Fred Schlanser Jr., president and CEO of the company, based in Fargo, North Dakota, says a reconstruction project in Fargo, which began earlier this year, is one of the largest his company has done to date. He insists that with the right people and equipment in place, they are able to tackle this job, as well as any other large project that come up in the future.

Founded in 1973 by Fred’s father, Fred Schlanser Sr., Master Construction has grown from a company that was primarily engaged with the private sector to a company that now has four locations — Fargo, Bismarck, Dickinson and Grand Forks — and does everything from excavation and site work to water and sewer rehabilitation and fiber optics installation.

“In the early days, we mainly worked on concrete driveways, sidewalks and patios,” says Schlanser, who has been involved with the company for nearly 40 years. “We later began bidding on city contracts for sidewalk construction, street repair, etc. Some of those projects and contacts led to copper and fiber installation, earthwork, water and sewer line installation and eventually curb and gutter projects.”

Today, Master Construction handles it all, as evidenced in the recent Fargo 13th Avenue project. In essence, that plan, which was developed by Apex Engineering, the design firm employed by the city of Fargo, involved widening a road that saw 38,000 vehicles per day from four lanes to six lanes. That meant the crews had to do road grade preparation, excavation, installation of new storm drains, curbs and guttering, paving, relocation of street lights and traffic signals, and everything else involved with road construction in a commercial area.

“We’ve definitely evolved over the years as a company to a point where we can handle a project of this magnitude,” Schlanser adds. “Technology and having the right equipment has been a key factor. Technological changes occur   frequently and in order to stay up to date, it is imperative to have knowledgeable technicians like the employees at Butler Machinery. With their help, we are able to achieve our goals.”

“We were quite dependent on GPS for road grade and gravel preparation on the 13th Avenue project,” says Winter. “We had 3,700 feet of new pavement to run. Plus, the slope on the east side of 42nd Street varied quite a bit, since some of that area was partly rural.”

“We had three dozers and a grader equipped with AccuGrade GPS on this project alone,” adds Scott Ahlf. “That definitely saved us a lot of time because we were able to maintain a continuous run, instead of jumping back and forth to check the grade. We had a dozer with GPS cutting grade with a blade equipped with GPS following.”

“In total, we have nine base stations that have been used around the area for a wide variety of projects, ranging from streets and parking lots to ball courts and ponds,” Winter adds. “They certainly play a major role in our day-to-day operations.”

Noting that about 90 percent of their heavy dirt equipment is Caterpillar equipment, Winter relates that the GPS support they receive from Butler Machinery has been just as crucial as the machine service. 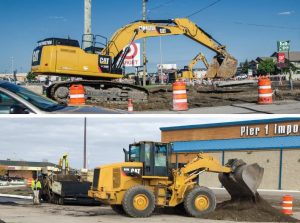 “They’re the best in town,” he states. “Butler has a whole tech division that we work with hand-in-hand, sometimes on a per-piece basis. Things are constantly changing and systems frequently need to be updated. Plus, issues come up, whether it’s a wire being damaged or an issue with the equipment. Fortunately, we’ve experience very little downtime with the GPS systems, due in large part to working with Butler’s group.”

In the meantime, Schlanser says he tries to maintain a newer fleet of equipment to avoid mechanical issues with the machines themselves.

“We also utilize Butler’s PM services and appreciate their willingness to work on equipment after hours. Their service teams are very flexible and have been there to help us out whenever we have an issue.”

Ahlf notes that project wasn’t without other challenges. One of those was working around two eight-inch gas pipelines that crossed below the avenue. He says there were also, a myriad of pipes and utility lines on the north side of 13th Avenue that confronted the team. Many of those are still used, while others were abandoned lines that were replaced with urban growth. Hence, a hydro excavator was sometimes needed to sort through the maze.

All in all, though, it’s been a successful project and one that has proven Master Construction’s ability to handle nearly any project. As Fargo and other North Dakota metropolitan areas continue to grow, you can bet Master Construction will be right there growing with them.