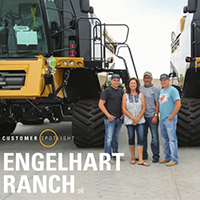 Years ago, the main crops produced by Engelhart Ranch, near Barnard, South Dakota, were wheat and sunflowers, supplemented by a little bit of corn. Today, the crop acreage is divided between corn and soybeans. But that’s not the only transition that has recently taken place on the fourth-generation family farm. Over the winter, the Engelharts also traded their John Deere® Model S680 combines for a pair of Claas Lexion® 750TT Terra-Trac machines.

In addition to Troy and his wife, Karla, who helps with the accounting and some ranch chores, the family operation includes Troy’s brother, Steve, and Troy’s sons, Tim and Collin, who represent the fourth generation. The crop and livestock operation also includes a cow/calf herd that is based largely on Simmental and Simmental crossbred cows.

“We had raised wheat for years,” Troy relates. “However, it got to the point that wheat prices were so low and we needed to use fungicides to grow the kind of crop we wanted. At the same time, it seems our climate has changed and new corn varieties were producing better yields than ever before. So we dropped out of wheat a little at a time and transitioned over to corn and soybeans.”

Corn works better with the cattle operation, too, since the Engelharts generally take the herd off of pasture in the fall and move them to corn stubble for the winter, where they can graze on corn stalks and waste grain.

Unfortunately, weather that’s good for growing corn in South Dakota can also be a challenge when it’s time to harvest. That was the case last fall, when muddy fields made it difficult to get the crop out of the field.

“Last year, around August and early September, we got some heavy rains that left a lot of standing water,” he recalls. “Yet, the ears had all filled and matured to where it was a good crop. We just had to find a way to get it out.” 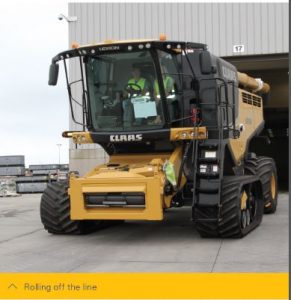 “The biggest thing about the Lexion combines is the Terra-Trac system,” he says. “They have had tracks available for so long that they’ve incorporated them into the machine as part of the overall design.”

Additionally, Lexions equipped with Terra-Tracs to get from field to field faster than any other combine – with the highest level of safety and driving comfort as well as outstanding track stability. The Terra-Trac system facilitates longer harvesting days and significantly increases seasonal performance. Improved adaptation to ground contours, and lower machine stress with an integrated intelligent track system speaks for itself.

That concept was reinforced even more when Butler recently flew the Engelhart family to the Claas Lexion factory in Omaha to witness their combines coming off the line and to tour the factory.

“The factory tour was especially informative, as they explained which components are built in the United States and which ones come from Germany,” Troy explains. “We also saw how different systems on the combine are inspected and tested on the line. And if a system doesn’t check out, it goes back to a service bay where it is repaired and reinspected before it goes back onto the line.”

Engelhart says the design of the Claas Terra-Trac system seemed to improve the ride, as well, which helped reduce fatigue on long days. He says they also did some comparisons last fall between their John Deere machines and the Lexion. 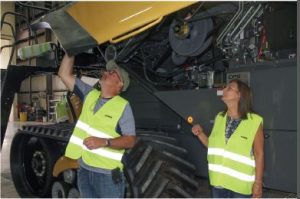 “In nearly all comparisons, the Lexion produced a cleaner grain sample. Plus, there seem to be less crop loss behind the Lexion combine,” he says.

The deal with Butler Machinery also included two new 40-foot MacDon® flex headers for use in soybeans. Should the family ever go back to wheat, Troy says the MacDon headers will still work better than the soybean headers they had for the Deere machines. In the meantime, they kept the 12-row John Deere corn heads and will use an adapter to fit them on the Lexion machines.