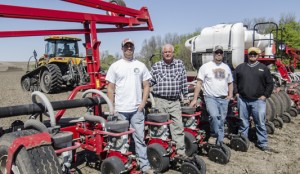 As a Butler sales representative, Nate Gion has to be pleased that his persistence in pursuing equipment sales with Strand Farms near Portland, North Dakota, finally paid off. However, it seems Merle Strand and his son, Jason, are equally delighted. If it hadn’t been for Gion’s efforts to sway their opinions, they might still be using equipment that now seems inferior in comparison, and, worse yet, working with a dealership that doesn’t hold a candle to Butler Machinery when it comes to service.

œI can still remember when Nate started showing up at the door about four years ago, recalls Merle, who took over the farm from his father-in-law. œI thought, ˜Who is this guy™, especially when he was so persistent. He™d always say, ˜I™d sure like to get you into some equipment from Butler Machinery.™ But the difference was that he backed it up by bringing out a piece of equipment with the idea that it was just a demo for us to try.

œI guess that was really one of the big selling points, he adds. œIt was the fact that Butler employees were willing to take their valuable time to come out here with a tractor ¦ or even a piece of tillage equipment ¦ to let us try it out on our own operation.

Since that time, the Strands have purchased two Challenger® track tractors ” a Model 765C and a Model 855C ” three Lexion® 580R combines, a Horsch Joker RT370 and two White® planters, including a new Model 8824 that replaced an earlier model. In each case, the Strands have not only been impressed with the equipment, but with the service provided by their Butler Machinery dealership.

œThe service has been the main selling point, Jason adds. œThey’re literally available 24 hours a day, seven days a week. There have actually been times they came out and worked on a combine or tractor during the night so we could be going the next day.

œYou can call on anybody at the company and you’re greeted with a smile or a friendly voice, Merle offers. œIt’s remarkable and something you don’t find elsewhere. The tech support has been unbelievable. I can remember a time when one of the technicians was out here late on a Sunday night to help us with an issue ¦ and he still had one more stop to make after he left here!

In the meantime, the Strands have come to take their Butler sales rep at his word when he talks about a new piece of equipment. Such was the case when they purchased the Model 8824 White planter. In addition to growing several hundred acres of corn, soybeans and sunflowers on their own farm, the family custom plants and harvests a variety of crops on hundreds of acres throughout the state.

œNate had made the comment one day that White had a totally new planter out that he thought we might really like, Merle remembers. œWell, he was certainly right. The simplification was amazing.

œEverything involving the planter is now on one monitor and everything is so clean and simple, Jason adds. œThere’s hardly anything that can wear out, because there aren’t any seals, tubes, brushes, etc. I think we’re getting about 99.9 percent singulation on corn and I don’t think there’s another planter out there that can do that without precision aftermarket options. It’s ready to go right from the dealership. Plus, since it’s so much simpler in design, there’s less maintenance.

Merle says they™d been equally happy with their Lexion combines, noting that it’s extremely easy to change from one crop to another ¦ including crops like canola that they don’t even grow themselves.

œWe™ve had customers call us over the winter to say they™ve been cleaning out the bins and can’t believe how clean the grain is, he adds. œThey expect to find some trash when they get to the bottom of the bin and there simply isn’t any. So it seems the people we work with have been just as impressed with the Butler line of equipment as we have been.