It often said that, one thing leads to another, and that was certainly the case with Hazers Metal and Recycling, in West Fargo, North Dakota. As company manager Duane Hazer explains, the family’s metal salvage business actually evolved as a spin-off of an auto and truck parts business started by his dad and brother back in 1969.

When you have cars and trucks that you salvage for parts, you have metal left over when everything of value has been removed, he relates. So we started processing metals and have got more heavily involved in that since.

In fact, in 1989, Duane says he went to Fargo city managers about recycling metal from other businesses to keep it out of the Fargo landfill. That led to the city hauling scrap metal to Hazers, while setting up a network of metal recycling dumpsters around Fargo.

As time went on, we eventually bought our own roll-off trucks so we could collect the metal ourselves and approach other businesses in the area about collecting metals, he adds.

Today, the metal salvage business, which still gets some attention from Duane’s 102-year-old father, Lester Hazer, has become the major part of their business. In the meantime, Duane’s son, Daniel, manages Hazer’s Auto and Truck Parts, Inc.

However, success comes with its own demands. Over the past several months, the supply of metal had been coming in faster than it could be sorted and shipped, which meant the piles kept growing. To alleviate the problem, the Hazer family turned to Butler Machinery Company this past August for a new Cat® M322D Material Handler.

In the meantime, Hazer says the material handler allows them to sort and load materials much faster, with a lot less hand labor, and allows them to get a better price upon material delivery.

The current trend in the metal market is the thinner the metal, the better the price, he says, noting that when they tear a car apart, the sheet metal often ends up on the top of the pile. As a result, when we went into the pile with a loader, we often got heavier material mixed in, which lowered the grade of material. That, in turn, lowered the price.

With the Cat material handler, we can go to the top of the pile where the light stuff is and load that separately so we maintain our market share.

Hazer says using the material handler with an electromagnet also allows them to unload incoming trucks a lot faster and sort materials much easier. Plus, by using the handler and electromagnet to move material, they aren’t picking up dirt in the load. However, the real efficiency comes when they’re shipping out the materials.

We’ve been able to load and ship an extra 43 semi loads of metal just since August, Duane says. With the Cat machine, we’re actually loading directly into high-sided trucks with eight-foot sides. With the material handler, we can drop material, like appliances, directly into the truck box and push it down as we go instead of having to crush and bale it first. So, that one machine has eliminated one baler, two tractors and one employee while still allowing us to get a full load by weight.

The Hazer family got more than they expected with the purchase, however. Since the M322D is the first Cat machine the family has owned, they also discovered the benefits of dealing with Butler Machinery.

We checked around with other brands and companies, Duane says. But our salesman, Kevin Sikich, took us through all the steps on what we needed and convinced us that Butler Machinery had the backup team to help us with service and support. Plus, they would come in after the sale and show us how to use the machine and get the most out of it. The other companies wanted us to fly our crew to them, which would have been very expensive. So we couldn’t foresee near the same level of support that we’re getting from Butler.

I began talking to the Hazers nearly a year ago, says Kevin Sikich, a Butler heavy equipment sales representative at the Fargo dealership. Because of all the gravel and asphalt surfaces around their yard, I recommended the M322D with the hard rubber tires, instead of the tracks. One of the big features is the hydraulically-risen cab, which helps the operator load correctly to maximize a truck’s load capacity.

Finally, we concentrated on the grapple system that Caterpillar offers, Sikich adds. When it’s wide open, it’s pretty much level across, which allows the operator to get into the material much easier and pick up a full-capacity load. On some of the competitors’ grapples, the arms sort of arch up when they open and they don’t get a full load. So they lose productivity. 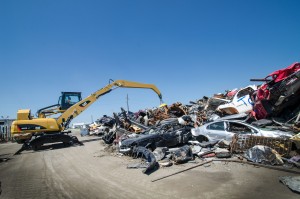 To ensure the new material handler stays on the job, Hazer says he also bought the service contract with Butler.

Since this is a totally new machine for us and we’ve never had anything like it before, we’re going to go with Butler’s service plan, says Dano Hager production manager at Hazers Metal and Recycling. I’m excited to be working with Butler, and after getting a tour of the parts and service department, I’m confident we’ll be getting better service from Butler than we have with some of the other companies.

In the meantime, the increase in productivity is more than either Hazer or Dano expected. Whether the credit goes to Caterpillar® for building an efficient machine, or to Butler Machinery for making the best recommendation, it makes little difference for Hazers Metal and Recycling at this point.