Championship Bloodlines At Every Turn 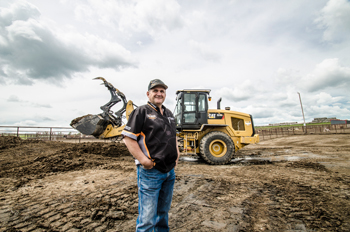 If you were to judge by the number of hours his Caterpillar® Model 924K wheel loader is on the job, you might get the impression that Chad Berger owns a construction company or is, perhaps, a contractor. However, the contrast may be rather surprising.

In reality, Berger and his family actually operate Berger Feedlot and Chad Berger Bucking Bulls near Mandan, North Dakota. Yet, his equipment puts in just as many hours, if not more, than if it was on any construction site.

œThere’s not a day goes by that the wheel loader isn’t being used from morning to evening, say Berger. œIt may start off unloading bales from a truck and stacking them in the yard; move from there to loading feed wagons; spread some gravel after that, and finish off cleaning out lots and loading manure. But it is constantly in use.

Berger has plenty of reasons to keep feedlot pens clean, too. During the fall and winter, the family will move as many as 7,000 head of feeder cattle through the facility, feeding up to 1,000 head at a time. However, during the rest of the year, while cattle are moved to pasture, the pens hold an even more valuable commodity ” professional rodeo bucking bulls, which are easily worth thousands, if not hundreds of thousands, of dollars.

As Berger explains, the bucking bull business was actually started by his father, Joe Berger, when he started buying a few bulls for Chad and his brother, Fred to ride, since both of them had become active in the sport. By the mid-˜60’s, Joe had enough animals to start supplying smaller events, and the business took off from there.

œWhen you get too old to ride bulls, though, you have to find another interest, so, with the support of my whole family, I took over the business and started Chad Berger Bucking Bulls in 2003, Berger explains.

Within three years, Chad had already put together a herd of bulls worthy of earning third place in the standings for stock contractor of the year with the Professional Bull Riders Association (PBR). A year later, in 2007, he was named PBR Stock Contractor of the Year. Today, Berger may have the buckle, but he credits the award to a whole team of people, including his wife, Sarah, son, John, daughters Lacey and Sadie, and his long-term hired man, Juan.

œMy wife handles all the bills and acts as my travel agent, while Lacy does the bookkeeping and Sadie maintains all the Internet sites, including Facebook and Twitter, he explains. œSo it’s a team effort.
Berger is quick to credit Tom Wald, his sales representative with Butler Machinery Company in Bismark, North Dakota, as well.

œIf we ever have a problem with our Cat® equipment, he or one of the service technicians is out here immediately, he says. œThat’s a big part of the reason Caterpillar is the only brand I own these days. I™m on the road enough that I need to know our equipment is going to perform as it should and that I have a company like Butler to back me up.

Berger says he also likes the fact that Cat equipment holds its value better than its competitors. œI™ve had other brands of equipment and watched it depreciate at about the same rate as the payments. That’s not the case with Cat equipment; and it makes it a lot easier to go in and talk to my banker when I have some equity.

Of course, that also made it easier to trade his previous 924H wheel loader for the new 924K.

œIt’s not like we were having any problems with the old one, Berger says, noting that in four years of use, it had never been in the shop once. œBut Tom would hardly take ˜no™ for an answer when we told him it was working just fine. After I kept ignoring him, he finally just brought one out.

œWell, it only took a day for us to decide we wanted to keep it, he continues. œIt does have more power than the other one and it’s a lot more comfortable; so I think we’re actually getting more done in a day than we were before.

That doesn’t even compare with the way it used to be, though. Berger recalls that when he was growing up, his dad was still using an International Harvester W9 with a loader to clean pens.

œBack then, it would take a week to 10 days to clean all the lots, he recalls. œToday, we can clean all our pens in less than a day.

Having clean pens today is no less important, though. In fact, based on current cattle prices and the value of the family’s bucking bulls, it’s probably even more important.

œWe’re stewards of the land, so we certainly want to take care of the resources, Berger adds. œBut we also don’t want to lose animals, and dirty pens are a breeding ground for flies, larvae and disease.

In a world where a two percent loss of feedlot cattle is not unheard of, Berger has seen losses drop below one-half percent. But it’s even more important to keep the bucking bulls and young bulls that are still developing in peak health.

To date, the Bergers™ bulls have traveled throughout the United States, including to and from Hawaii by commercial airline. In the meantime, Smack Down, one of the family’s best animals was nominated as the PBR bull of the year three years in a row. And even through he is due to retire this year, he will still go out on top as one of the five best bulls in the world.

œWith more than 100 bulls on our roster and either commercial cattle or future PBR champions in the feedlot 365 days a year, it’s important to keep pens scraped and to maintain clean environment, he insists. œWe simply couldn’t do this without the help of the Cat wheel loader and Butler Machinery.

œA regular tractor and loader would never last doing all the things we do with the wheel loader, he concludes. œI honestly think it would be ˜busted to pieces™ in a year.

œCleaning pens with a tractor and loader was work, too. Using the equipment we have now is kind of like being a kid and playing in the sandbox. It’s more fun than work.